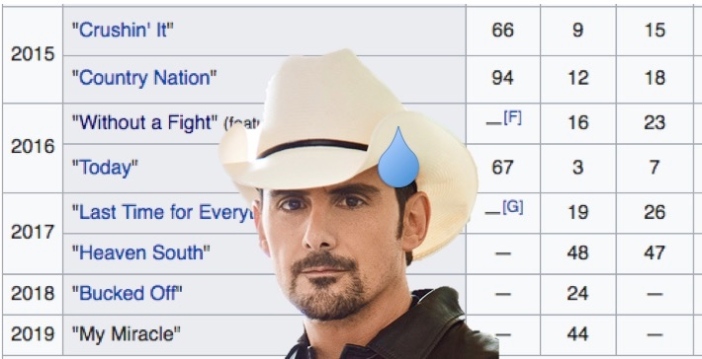 One of the more overlooked storylines this week was the death of Brad Paisley’s most-recent single “My Miracle,” which was finally put out of its misery after failing to crack the Top 40 after four months at radio. After going three years and four singles without making much of an impression of the radio, it appears that the end of Paisley’s mainstream career is upon us.

On some level, this was to be expected: Paisley is 46 and has been in the business for twenty years now, and Nashville has no qualms about putting its aging stars out to pasture in favor of “the next big thing.” Still, something about this explanation doesn’t add up: Tim McGraw, Kenny Chesney, and Keith Urban still seem to be making headway on the charts despite being on the backside of fifty, and a 67-year-old George Strait managed to maintain a holding pattern in the low teens with “Every Little Honky Tonk Bar” earlier this year. Heck, at 42, 43, and 43 respectively, Jason Aldean, Luke Bryan, and Blake Shelton remain some of the genre’s biggest stars (and in my opinion, Paisley runs circles around all three of them as an artist). What do all these folks have that Paisley doesn’t?

To find the answer, I decided to bring back a feature that has been on hiatus for almost three years. Hold on tight, because it’s time for a deep dive!

To avoid cutting ourselves on Occam’s Razor, let’s consider the obvious angle first. If you ask your average country music listener “What did Brad Paisley do wrong?” most of them will point to this track:

While I believe that Paisley and LL Cool J put this together with the best of intentions, ultimately this was not a good song, and it was not well-received. The pair was lampooned and pilloried over the song, and it’s fair to ask whether Paisley’s reputation has ever recovered. It’s also hard not to notice the sharp divide between Paisley’s track record before and after Wheelhouse (which contained “Accidental Racist”) came out in 2013:

*Wheelhouse is split across this divide: “Southern Comfort Zone” and “Beat This Summer” came out before the album’s official release, while “I Can’t Change The World” and “The Mona Lisa” came out afterwards.
**All single rankings are based on Billboard’s Country Airplay chart, and all data comes from Wikipedia.

So was “Accidental Racist” the anchor that eventually dragged Paisley’s career down to Davy Jones’s locker? It certainly didn’t help matters, but I’d argue that it only hastened a process that was already underway. For example, if we look at the RIAA certifications for Paisley’s “regular” albums (i.e., we’re setting aside Play, Hits Alive, and Brad Paisley Christmas), the downward trend predates Wheelhouse by several years:

These numbers indicate that the ball was already starting to roll downhill when Wheelhouse came along. What other factors could have been at play?

Well, my old Josh Turner deep dive might have an answer:

In 2012, Florida-Georgia Line released “Cruise,” a party jam that went on to become the biggest hit in country music history. The track signaled the rise of Bro-Country, in which young men half-sang, half-rapped about drinking, partying, and hooking up with hotties in the back of a pickup truck at midnight in the middle of a field. Lyrics were shallow, women were objectified (and summarily booted off the radio), and fiddles and steel guitars were exchanged for screaming guitars and drum machines.

Bro-Country, as well as the Metropolitan R&B craze that followed, hit country music like a tidal wave, and as new artists like FGL and Sam Hunt rode the wave to fame and fortune, singers that predated the craze were faced with a gut-wrenching decision: Conform or die. Most singers swallowed their pride and chose the former.

When the Bro-Country monster came for Paisley’s soul, however, he chose door number three: He would eventually conform, but he would do slowly, reluctantly, and on his own terms. While his aging contemporaries happily hopped aboard the trend (McGraw’s “Truck Yeah,” Shelton’s “Boys ‘Round Here,” Aldean’s “Dirt Road Anthem,” Bryan’s “That’s My Kind Of Night,” etc.), Paisley stuck to his guns with This Is Country Music and Wheelhouse, and while both experimented with different sounds (the latter much more so), they mostly avoided the Bro-Country trend. Even when he seemingly waved the white flag with Moonshine In The Trunk, the fact that it was the first one to break Paisley’s every-two-years rhythm suggested that the orders came from above his head, and the album was not so much a concession to the trend as it was an attempted fusion of Paisley’s usual style with the electronic beats and party anthems that were in vogue (the fiddle and steel guitar remained omnipresent throughout the disc).

The story was much the same for the Metropolitan era: Both his Demi Lovato collaboration “Without A Fight” and his eventual Love And War album eschewed the slick, pop-tinged elements the rest of the genre was leaning on⁠—in fact, it seemed to touch on every faction of the genre except that, running the gamut from rock n’ roll to bluegrass. (Even the Timbaland collaborations sounded surprisingly conventional by Paisley’s standards.)

Unfortunately for Paisley, trends are trends for a reason, and while traditionalist might argue that Paisley’s stance bolstered his country cred, they didn’t help his popularity or his bottom line, and ultimately left him stuck far behind his peers.

And yet…could there be more to this story? Paisley certainly got shafted when the genre shifted under his feet, but the genre wasn’t the only thing that was shifting at the time.

From Hope To Hate

Let’s take a trip back to 2009 for a moment. Barack Obama had just recently become the first African-American to win the US presidency, striking a chord with his message of hope and optimism (remember “Yes we can”?). Despite coming off the nastiest recession since the Great Depression, people were bullish on the future of the country.

This optimism and open-mindedness were reflected in Paisley’s American Saturday Night, as “Welcome To The Future” and the title track celebrated the nation’s inclusivity and promise. This was the first time Paisley’s work had explicitly addressed these ideals, and it wouldn’t be the last: Wheelhouse‘s “Southern Comfort Zone” nudged people to step outside their bubbles and experience everything the world had to offer, and Moonshine In The Trunk‘s “American Flag On The Moon” referenced the country’s past accomplishments to proclaim that it had the power to move past petty divisions and reach new heights in the future.

Fast forward to 2017, and the national mood has done a complete 180. Donald Trump had won the presidency by tapping into the anxieties and biases of the population, and hope and optimism had given way to cynicism and a dot-eat-dog, us-vs.-them mentality. Tribalism had usurped diversity, and the hopeful vision of the future had given way to a bleak dystopian nightmare. (At one point, only 24% of Americans thought the country was going in the right direction.) In other words, this was not a great time to ask people to venture out of their comfort zones.

In the face of this mood swing, Paisley’s message became a bit more muddled. Singles like “Today” and “Heaven South” encouraged folks to live in the moment and find happiness in the people around them, but inclusion and long-term vision were no longer emphasized. He tried to make a plea for understanding in “The Devil Is Alive And Well,” but this time the message never made it to the airwaves, likely because no one wanted to hear it. Paisley still projected optimism, but now he was in the minority.

So how does this fit into our pattern from before? Well, the pessimism and resentment that bubbled to the surface in 2016 didn’t appear overnight⁠—these issues had been present all along, and had just been swept under the rug and ignored. (I’ll be honest: I had no idea how many people were angry over Obama’s election until Trump took office.) Country music is generally consider a conservative format (for example, consider its continued allergy to playing female artists), and I’m starting to think that when Paisley started pushing people to open their minds back in 2009, they started pushing back in the form of not buying what he was selling. He didn’t get blackballed like the Dixie Chicks, but he took a loss nonetheless.

So What Actually Happened?

Put it all together, and a potential narrative begins to form.

Of course, this is not to say that Paisley is completely blameless in the matter. For one thing, the writing on his post-Wheelhouse albums does not seem as sharp as his earlier work: Songs like “4WD” and “Gone Green” were so unclear about the narrator’s point of view that it was hard to say what they were for or against, and his attempts to critique and comment on pop culture on songs like “selfie#theinternetisforever” and “Love And War” felt incomplete and unconvincing. On top of everything else, it’s also plausible that after fifteen years, Paisley (who mostly writes his own material) simply ran out of gas. (As someone who can no longer think of a good Super Mario Maker 2 level concept after making 30+ courses in the original game, I can sympathize with that.)

Regardless of the “how,” however, the fact is that Brad Paisley will likely no longer be a factor on mainstream country radio, and the genre is worse off for it. Still, don’t cry too much for Paisley: He remains a major draw on the road, he’s becoming a television fixture by judging talent shows and hanging out with Peyton Manning, and the dude seems to have a happy family life. His place in country music history is secure, even if his run feels like it’s ending prematurely.

4 thoughts on “I’m Gonna Miss Him: What Happened To Brad Paisley?”